The Harvard Law School Library is pleased to announce that Notes of cases adjudged in Jamaica, May 1774 to Dec. 1787 (Edinburgh : Printed by Adam Neill and company, 1794) [HOLLIS 4417047] has been digitized and is now available through HOLLIS. The Harvard Law School Library purchased this folio volume of 18th century law reports in 1903; it is one of only a few known copies. As the volume’s prefatory â€˜Advertisment’ on pages iii-iv explains, these reports of high court cases are based on “the very full notes of every case that came before” John Grant, a native of Inverness-shire (Scotland), and chief justice of Jamaica’s Supreme Court from 1783-1790. Colleagues had encouraged Grant to publish his notes for their use at court, and after retiring to Edinburgh, Grant began to revise his notebook with that goal in mind. Grant died on March 29, 1793, leaving three quarters of his notes unprinted. The task was picked up and continued by friends and colleagues who saw the work through the press; the volume was published in 1794. 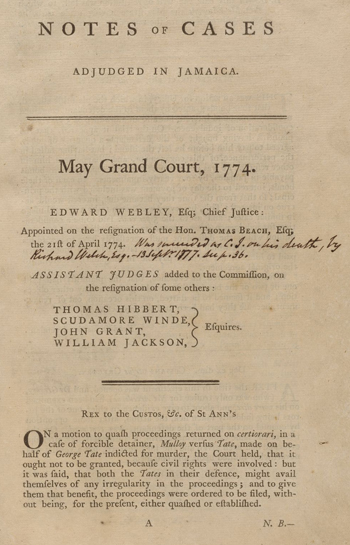 Following the table of cases, Notes of cases adjudged in Jamaica begins with the May Grand Court of 1774— when Grant was a newly minted assistant judge under chief justice Edward Webley—and continues through the November Grand Court of 1787, by which time Grant had become chief justice. The folio volume is rich in bibliographical references and footnotes and in this copy, an early (and unknown) reader has made occasional marginal annotations. 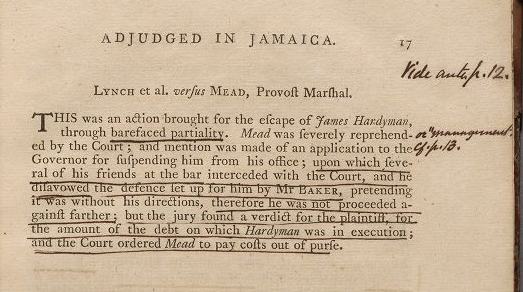