THIS BOOK TALK WILL BE RESCHEDULED AT A LATER DATE 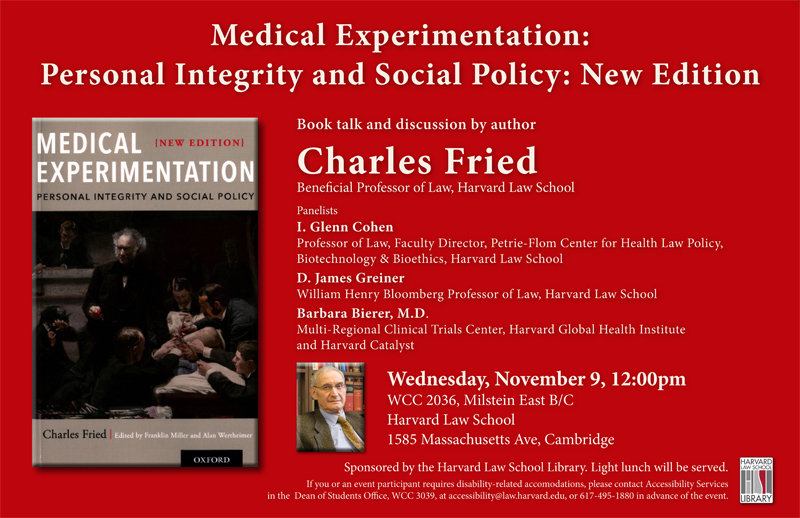 Educated at Princeton, Oxford and Columbia Law School, Charles Fried, the Beneficial Professor of Law, has been teaching at Harvard Law School since 1961. He was Solicitor General of the United States, 1985-89, and an Associate Justice of the Supreme Judicial Court of Massachusetts, 1995-99. His scholarly and teaching interests have been moved by the connection between normative theory and the concrete institutions of public and private law. During his career at Harvard he has taught Criminal Law, Commercial Law, Roman Law, Torts, Contracts, Labor Law, Constitutional Law and Federal Courts, Appellate and Supreme Court Advocacy. The author of many books and articles, his Anatomy of Values (1970), Right and Wrong (1978), and Modern Liberty (2006) develop themes in moral and political philosophy with applications to law. Contract as Promise (1980), Making Tort Law (2003, with David Rosenberg) and Saying What the Law Is: The Constitution in the Supreme Court (2004) are fundamental inquiries into broad legal institutions. Order & Law: Arguing the Reagan Revolution (1991) discusses major themes developed in Fried’s time as Solicitor General. In recent years Fried has taught Constitutional Law and Contracts. During his time as a teacher he has also argued a number of major cases in state and federal courts, most notably Daubert v. Merrell Dow Pharmaceuticals, in which the Supreme Court established the standards for the use of expert and scientific evidence in federal courts.

“First published in 1974, Charles Fried’s Medical Experimentation is a classic statement of the moral relationship between doctor and patient, as expressed within the concept of personal care. This concept is then tested in the context of medical experimentation and, more specifically, the randomized controlled trial (RCT). Regularly referred to as a point of departure for ethical and legal discussions of the RCT, the book has long been out of print. This new, second edition includes a general introduction by Franklin Miller and the late Alan Wertheimer, a reprint of the 1974 text, and an in-depth analysis by Harvard Law School scholars I. Glenn Cohen and D. James Greiner which discusses the extension of RTCTs to social science and public policy contexts. The volume concludes with a new essay by Charles Fried that reflects on the original text and how it applies to the contemporary landscape of medicine and medical experimentation.” — Oxford University Press